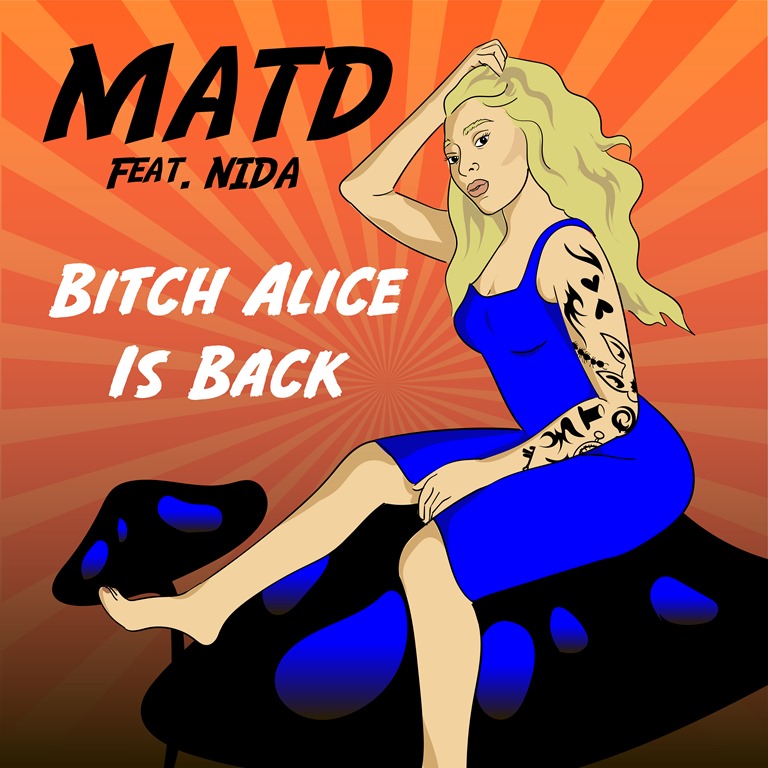 MATD is a pop duo. Marcos Kuusjärvi and Veli Eronen formed MATD in 2020. This is their second Alice in wonderland story.

Marcos and Veli enjoy creating music using fairytales, pop art and stories. Their most famous songs are dealing Cinderella, James Bond and Tom of Finland among others.

This Alice story can be visualized and take a trip to wonderland through music.

Today they live in Spain and Finland. Their former band “Max and the Ducks” reached the 9 official top 30 songs in Finland 2014-2017.

Nida is an LA based singer/songwriter originally from Croatia, raised in South Africa. She proudly sings for the MATD band and is looking forward to the release of Bitch Alice Is Back! It’s a powerful, empowering, yet fun and quirky rock track bound to get you on your feet and moving!

Hana loved singing on this track, as it’s a great twist on a classic story we all grew up with. It transports you into another world- the world of a grown-up Alice, ready to take anything on! We can’t wait to see how this rocking track is received by audiences!

MHBOX ROCK OPERAS: Arriving like a ‘Johnny Depp’ Thunderbolt and Lightning Party, the well produced rock sound of ‘MATD’ is wonderful and creative on haunting new release ‘Bitch Alice Is Back’

Hana is also the singer/ songwriter and frontwoman for Asila and they are currently set to release the latest single from their forthcoming album, Acid Rain. She also runs her own studio business: http://www.hanasings.com/ where she is working on a number of projects. Recently finishing up the music for an independent film to be released later this year.

THE FULL BITCH ALICE IS BACK STORY

This song is based on Alice in Wonderland story “Through the Looking Glass” written by Lewis Carroll and movie by Tim Burton starring Johnny Depp and Sacha Baron Cohen.

Alice returns to wonderland and spoils all the fun.

It´s time to take action ride back to wonderland with rock´n roll attitude.

This fairytale also has some edgy meanings based on “Lion and Unicorn” battle. These are symbols of England and Scotland.

Will there be a wonderland through Brexit? Or is it exit for Scotland? Another fight more?