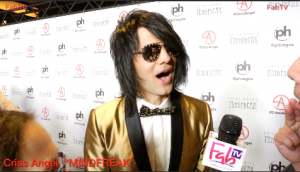 Angel was met on stage by executives from Caesars Entertainment and BASE Entertainment who presented him with a $10,000 donation to Angel’s Johnny Crisstopher Children’s Charitable Foundation.

Criss Angel at his opening of “MINDFREAK” at Planet Hollywood