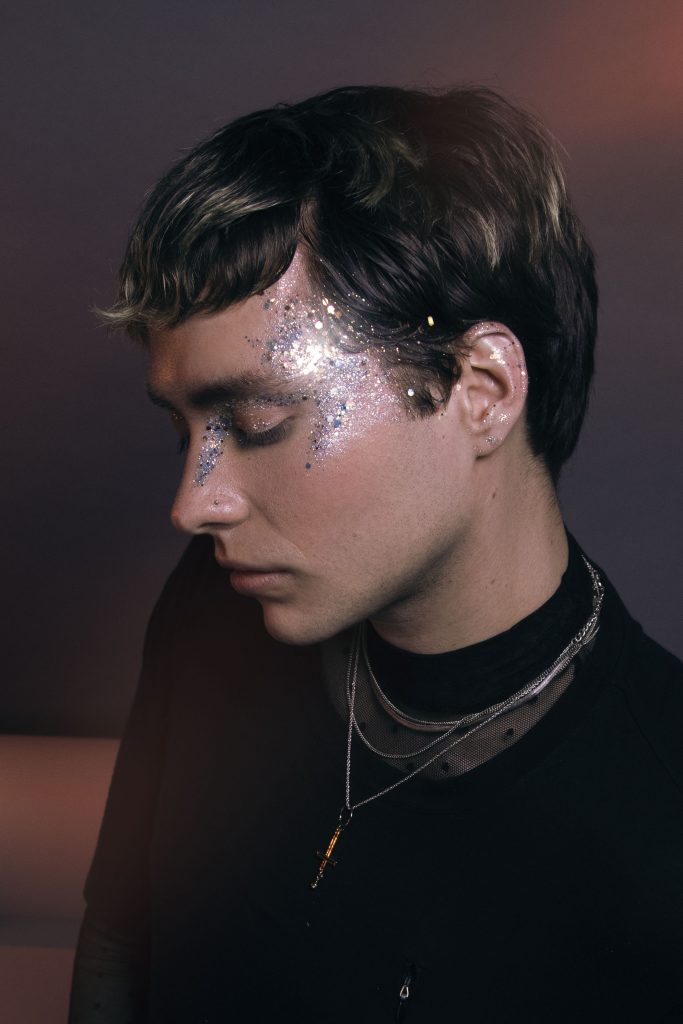 We caught up with South African Glam Pop Indie Boy Charlie Void to chat about his new single You And Me, his experience withe the Cape Town Gay scene and why he went from Disco to Ballad.

Your new single You And Me is quite haunting. The song is about unrequited love, was this a crush or was there potential there for a relationship? Dish up the news. – To be honest it was a long time ago but as I recorded this song it took on a more figurative meaning for me personally at least. The song was written originally about a crush I had but “You & Me” is also about letting go of the things that destroy us. That’s why it has many meanings for me. It could be walking away from a relationship, a job that makes you miserable, a drug addiction, an eating disorder… anything that’s destroying you.

Your previous singles were quite glam pop, what does it feel like releasing a ballad? How do you think it will be received by your fans? – It feels good, it feels like I have a voice for the first time and I’m speaking about something that matters. In the past with my glam-pop songs it felt very shallow for me as an artist, I felt like I was pandering to the audience and now I feel like I’m speaking through my music. Don’t get me wrong, I love dance music but releasing a ballad is so refreshing and fulfilling.

You live in Cape Town SA. Talk us through the gay scene there, is everyone liberal or do you still have your moments of prejudice – Cape Town is probably the most liberal place I know of, but of course we still have issues of homophobia even within the gay community itself it’s not uncommon to see some transphobia or just toxicity but nonetheless some of the most kind hearted and amazing people (gay or otherwise) I’ve met in Cape Town so for all it’s worth I wouldn’t want to anywhere else! Easily the best city in the world!

Your brand profile is very flamboyant – were you ever deeply in the closet and if you were what was your persona or image back then? – I use to be deeply closeted all though everyone else could see I was gay… I was in denial and didn’t know how to confront it. The person I use to be was another person that I don’t recognise. I used to be shy, quiet, depressed, anxious, overweight, and just had a general state of poor mental health. I always knew I wanted to be “Charlie Void” someday and I knew that one day I would find the courage to be him because he represented the real me that I was too afraid to be back then.

Do you write all of the music and lyrics? Also is your brand image yourself only or do you have a stylist and advisor? – I’m a control freak when it comes to my music so yes, I do write the lyrics and the music myself. I’ll usually write the lyrics first and sit by the piano with my phone and record the melody while I sing over the piano’s chords. I’ve crafted the image and persona for Charlie Void for years now so I don’t really take a lot of outside advice or input when it comes to my image however I do use a stylist and ask for the advice of those close to me to help bring my vision to life. They know the brand almost as well as I do so they have a good idea of what I want.

What has the whole Lockdown and CoronaVirus taught you about yourself and your career – The lockdown has been the best thing for me. It taught me who my real friends are, it brought me and my partner together and most importantly it gave me the opportunity to focus on my mental health. I started therapy to deal with my anxiety and depression and I have never been better! During the lockdown I could focus on my vocal health as well and it was what made “You & Me’s” quality possible because my vocal and mental health was in the best condition it had ever been in. Recording a song like this one takes courage because it is so raw and exposed.

Latest Book you read and did you enjoy it? – The Comeback by Ella Berman, I enjoyed it very much despite it being such a scary reflection of a post-#metoo world in Hollywood.

What did you have for breakfast today? I had wholewheat toast with avocado, hummus, chickpeas and sauteed mushrooms on top.

Biggest Music Crush? – Well if I could be as talented as anyone I’d pick Lady Gaga but if we’re talking about looks I’d have to go with Troye Sivan.

Favourite Food? – Beyond Burgers! I can’t really remember what meat tastes like as I have been vegan for so long, but I imagine it tastes like a beyond burger.

The thing that gives you the most anxiety? – Being late, I’m always 10 mins early to every appointment I have.

Favourite Holiday destination? Amsterdam, Netherlands. I love the vibe and the nightlife in Amsterdam.

If you were told the world was going into lockdown for 3 more years and you could only have a supply of 5 things ( besides water and food), what would those things be? – Unlimited and fast WIFI, A good streaming service, My boyfriend, Gin, my PS4