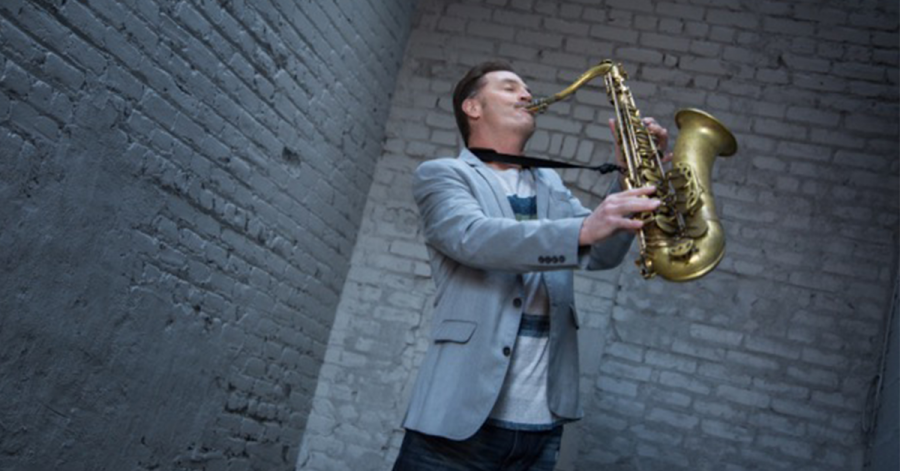 Jazz musician Stephen Ray Watts, founding member and saxophonist in the Denver-based Contemporary Jazz band Dotsero, is playing a different tune. Watts transitioning from contemporary jazz to the world of Contemporary Christian Music after a life-changing experience with Jesus Christ that helped him find recovery from alcoholism almost ten years ago.

His first contemporary Christian album, entitled, “Through All Generations”, a 2 and 1/2 year project recorded in Colorado, has stretched both his musical prowess and his faith. Uncharacteristically Watts wrote lyrics, sang on selected melodies and harmonies, played instruments other than his saxophone, and partnered with vocalists to create an album that explores the darkness of human struggle and a return to the light of God.

Watts admittedly a “seasoned alcoholic” in his early teens, was fortunate enough to have been raised in a Christian home by, unknowing, yet loving parents who encouraged him to pursue his love for music, follow his passion and keep Jesus close.

His career exploded as his disease progressed. A failed marriage with his son’s mother, followed by many other broken relationships. For years he tried to manage his addiction, coordinating his life, relationships, parenting and work around which days he would allow himself to drink.

Like many addicts, he started reasoning and bargaining with his demons, making promises he could not keep causing inner anguish, guilt, and shame. “It’s never a good situation where you’re physically trying to plan your life around an addiction,” Watts said.

In 2008 Watts was in his darkest hours, witnessed by people closest to him, hallucinating and calling out to Jesus for help and forgiveness. His rabbit hole of emptiness became overwhelming, and it became apparent that “(alcoholism) was killing me and I needed to get help.”

He spent four days in a detox center and immediately got involved in Alcoholics Anonymous.

It was his love of Jesus Christ that helped him acknowledge, admit, and somewhat manage the addiction.

In Watts’s opinion, alcoholism is a progressive disease that never ends. “Addiction is a very selfish and self-centered physical and mental obsession and problem,” Watts said of the emotional hurts his addiction caused his loved ones.

A core principle of the AA “Big Book” is to acknowledge a higher power. “I think it’s divinely put together because one of the biggest assets of the program of Alcoholics Anonymous is this idea of being able to surrender and turn one’s life over to a higher power of one’s own understanding.”

Watts wants to use his experience with a successful recovery, his faith in his higher power; Jesus Christ, and his life-long love of music to bring peace to those who are struggling and help them see that there is hope for recovery.

His freedom has given him a new outlook and new purpose in life. The new album, though inspired by his personal struggles with alcoholism and recovery, is not overtly about addiction, but rather about the human struggle to wade through life’s darker times to find the light of the world, Jesus Christ. Watts kept his lyrics more faith based and Biblically inspired so he could reach a larger audience in the hopes that his personal message could reach people who don’t even know they need help.

“By taking me, a modern-day prodigal, and letting people see the error of my ways, maybe I can inspire young people, Christians, believers and non-believers to take an honest look at the secrets that they have in their life that are hurting them,” Watts said. “If I can bring out the idea that I was in the throes of alcoholism and addiction and say, I went into these dark places, but Jesus brought me out, and I’m not ashamed to tell you that now I am “all in” to be a witness for what Jesus Christ has done for me.”

In the Bible, there is a story about the son of a wealthy man who demanded his father give him his inheritance. Upon receiving his inheritance, the son went into the world and squandered his money with drinking, gambling, and riotous living. The son eventually ran out of money and returned to his Father’s home to ask for a job as a servant. The father welcomed him home with love and forgave all his poor choices. The story of the prodigal son represents Christ’s love for the church. Watts considers himself a “modern-day prodigal son,” and wants to use his story of recovery to help others return to a place of peace and acceptance.

After releasing his album, Watts plans to go on tour sharing his music and his testimony. Since his music is designed for both Christians and struggling addicts, he will continue to tour at churches, addiction recovery meetings, Bible Colleges, and at recovery centers in Colorado, around the country, and around the world. Watts plans to visit Voice of Life Radio in Dominica this Spring 2019.

“I will break the ice with a small performance where I just play music,” Watts said of his experience with a recent tour. “I’m sharing much more than a message of recovery, but a reality based on truth. My higher power is Jesus Christ. This is what I believe took my obsession (with alcohol) away, but I had to do the work to be able to show my sincerity and that I was true to this ultimate surrender.”

After nine years and six months of consecutive sobriety, Watts acknowledges that his disease is still alive. He continues to attend AA meetings and he relies heavily on the strength he finds in his faith. He hopes his testimony and his success in battling and arresting the addiction, “One day at a time” will help others find hope.

Watts will release his album and begin touring in early 2019. Watts has also been reaching out to God’s children via his internet radio / live stream broadcast entitled DOTSERO PRAISE FELLOWSHIP, on www.kuhsdenver.com and facebook.com/stephenraywatts, and Dotsero Praise Fellowship Youtube Channel, with a New Podcast scheduled to begin also in 2019.

The CD will be distributed online and in hard copy at religious music / book stores, and at live performances everywhere Dotsero and Stephen Ray Watts perform worldwide.